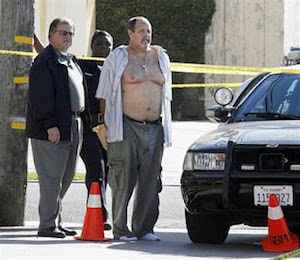 “He was a really nice guy.”

That is a quote from a friend of the custody-battle embroiled beauty salon killer from Seal Beach, California. When I first heard about the horrible killings and listened to the friends, former friends and neighbors of the killer I said to my psychologist-fiance- “Huh, you don’t usually hear that about these kinds of nuts.”

By the next day’s news cycle the motivation for the killings was revealed. Embroiled custody battle over an 8 year old boy. The shooter and his ex-wife had been in court that very week. Then I thought to myself- “Ok, now I get it.”

I am a divorce mediator and I conduct private mediations as a majority of my practice. People who agree voluntarily to resolve their disputes in private mediation are a different breed of divorcing couples. They’ve decided from the get-go to resolve their differences. They are not all touchy-feely “I’m divorcing my best friend” types. What they have in common is that the divorce has not gotten the better of their good sense. And that’s no small feat. I congratulate them every time.

Every now and again, a couple of divorce litigators will throw a child custody warring couple into my office. The nature of these couples is an altogether different animal. These folks are angry to the point of tears and table banging. They are standing on an emotional ledge. It is my job to talk them off the ledge.

And as the Seal Beach Killer demonstrates, I’m not over-stating the emotional mindset of these folks. I don’t need a psychologist’s expert opinion to tell me that a custody battle is enough to turn a “nice guy” into a monster. Is there anything more primal than a parent-child bond? There’s no negotiating that away. That’s why in Maryland 100% of family law matters filed in court involving visitation or custody (often referred to as “access”) are referred to mediation as a first resort. The mediation referral should not have to wait for a court filing.

Every day separating and divorcing couples turn to divorce lawyers out of ignorance, fear and/or with vengeful motivations. The divorce lawyer attempts to negotiate the custody issues. The problem is that the middleman (or woman) attorney is the dead wrong approach. A couple who comes to the legal system whether via divorce lawyer, divorce mediator or the courts requires an immediate intervention to ratchet down the heat. To reality check. To be monitored by the system. Because a parent threatened with the loss of a child is completely unpredictable. Heap on the financial and romantic devastation (imagine an adulterous spouse who has a “leg up” on the custody dispute due to his or her stay at home parental status) and you have a chemistry experiment waiting to go bad.

A divorce lawyer is sworn to zealously advocate for his or her client. Unfortunately in custody situations this sworn duty is in direct conflict with the true needs of parties to de-escalate the situation. A few years back the Maryland Bar fought like trapped animals to block an attempt by the ethics rules committee to add in a requirement that lawyers must advise clients about the option of alternative dispute resolution. They won. Of course. They are litigators. Their clients have lost.

What will it take to create the requirement that divorce attorneys, when presented with a high conflict custody matter, immediately refer that couple to an intervention to de-escalate the situation? Do we need a Seal Beach killing spree here in Maryland? Why are the courts bound to refer such a matter to mediation, but yet, the attorneys can’t even be burdened with a duty to advise the party about the option of alternative dispute resolution? We all know why the lawyers don’t want to be bound by such an obligation don’t we? And it doesn’t involve the best interests of any child or even the client represented. It is because custody battles command the big retainer bucks.

No doubt that a great litigator can artfully make the argument that the Seal Beach killer was an anomaly, but was he an anomaly? The killing spree reaction may be a fluke but extreme reactions of parents in custody battle situations happen every day. Waiting for an intervention by the courts after a few rounds of threatening letters designed to frighten the pants off of “opposing party” is too late. It is up to the “first responder” in an custody emergency to make the intervention- which due to the hateful nature of the beast is typically the litigation lawyer. Unfortunately it takes two litigation lawyers to agree to advise their clients as one voice to forego the profitable custody litigation, so a single ethical attorney won’t get it done alone unless he or she immediate files in court and requests the intervention- whether it be counseling, parenting classes or mediation.

We don’t need another parental kidnapping or homicidal rage to learn that which the legal system has repetitively learned- custody disputes must be met as an emergency situation by the “first responder” lawyers, and they must be required to do so, because we can’t count on a professional to look past his or her financial best interests in a system that doesn’t require that. That expectation is about as realistic as a parent not reacting badly to an attempt to separate him or her from his or her child.

For more information on divorce mediation in Maryland, visit my website.