The Child of Divorce Goes to College

When Children of divorcing parents pack-up for their journey to higher education, they don’t leave their trauma behind. The adversarial process of the divorce through attorney-led negotiations and litigation intensifies this trauma and the effects are long-lasting. Children whose parents are suffering through adversarial attorney-led negotiations, or heaven-forbid litigation, stuff a whole lot more than clothes, a bedroll and a new backpack into their suitcases. They often pack guilt about leaving behind vulnerable parents and/or younger siblings who have been laid low by the divorce, and laid even lower by the torturous and expensive adversarial divorce process.

Thankfully children are resilient and for those kids on their way to new horizons they have a short reprieve from at-home turmoil until the trip home for the Thanksgiving holiday. Phone calls home to discuss holiday plans that may or may not be settled are reminders of the upset they left behind. Holidays for children of divorce are especially upsetting where the judicial process of adversarial divorce is ongoing and seemingly never ending. What should be a happy homecoming instead is dreaded. 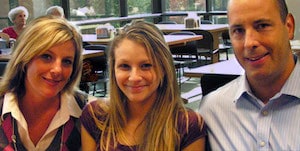 The parent-juggling around the college launch can be excruciating. While in-tact parents suffer the “empty nest” syndrome, college-bound children of divorce are watching their parents deal with an even emptier nest. At the same time they are forced to endure the choice to allow one parent to do the launching while the other stays behind; or to bring the ugly divorce right into their new dorm rooms, and hoping the new roommate’s first impression won’t become a spectacle of which parent bought or didn’t buy his or her share of the “stuff” needed to start college life.

It is unlikely that parents suffering through divorce are thinking of all the ways a contentious divorce process will ripple through the events of their children’s lives. Barring tragedy, most of the “events” are the happy moments in life. Graduations, bar mitzvahs, college launches and holidays become battle grounds for conflicted former spouses. Using an adversarial divorce process is the way to guarantee that the trauma of divorce is not only not forgotten, it is re-lived by the whole family with each event, and college launch is no exception.

There’s a different and better way to divorce. Seeking out mediation to resolve your legal disputes is a humane and private alternative. A portion of the money saved by avoiding costly adversarial lawyers and litigation can better used treating each family’s member’s distress with therapy. A healed two-home family is quite different than having a two-home family that feels like the Hatfields and the McCoys. The resources available like parent coordination classes can teach you have to move forward to stop the cycle of anxiety and stress for the parents and their children. Taking this approach to divorce might seem impossible given the rage that arises from divorce. Realization of the permanent effects of hostile divorce on the children might give you the strength to take the steps necessary to de-escalate your divorce situation.

For a college student leaving home shouldn’t come with extra baggage just because the family has suffered a divorce. Coming home for Thanksgiving to see that both parents and younger siblings are moving forward peacefully and productively, with known and accepted holiday schedules, is something they will be truly thankful for.